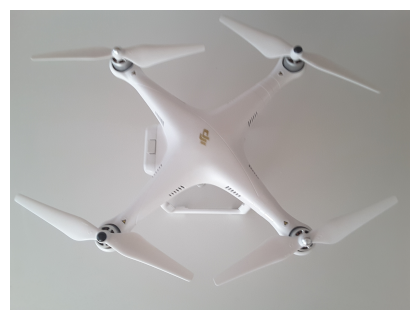 DJ's Phantom 3 Professional is a different league than my original SYMA.

It is a well-proven, robust and reliable helper. It is not cheap, but the price / quality ratio is excellent.

Its four 100 Watts engines give it a respectable speed of up to 16m / s (57km / h) and a vertical climb of up to 5m / s. For filming is an invaluable addition to his 3 axis camera stabilizer - gimbal. The quality of photos (12Mpx) and video (4K) as well as camera stability provide high quality results for both movie recordings and photos for any kind of activity.

Phantoma flight control contrary to Syma X8C is incomparable. Itcan also cope with moderate winds (in my experience with less gentle ones) and go where you want and not where the windwant to. Altitude stability will be appreciated by all those who had previously drone with no height stabilization and even with the so-called hanging they still had to stabilize the position of the drone and couldn't devote themselves to taking photos.

The big advantage is the possibility of using intelligent control modes such as Waypoints, Point of interest Home ock and Course lock, which automatically adjusts the flight direction of the quadcopter according to the preset parameters and thus allows the pilot to devote more time to recording or photographing objects of interest. However, this does not mean that you are no longer responsible for control. According to the regulations, you or your helper should know when flying your quadcopter and what obstacles or pitfalls is facing. Dozens of Phantom flight hours have confirmed its qualities and some movie footage reminds you of a photo until you see a car or anything else moving in the distance.